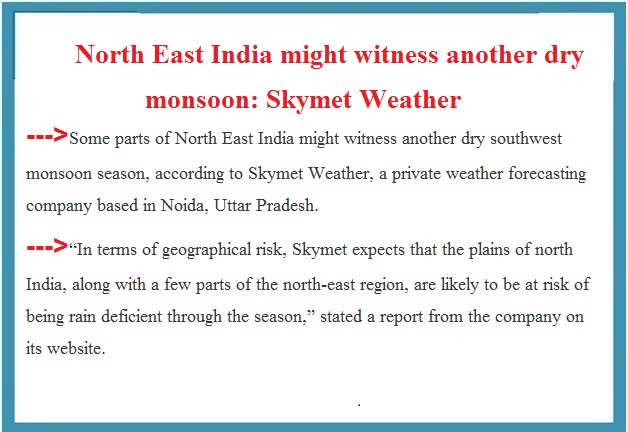 Some parts of North East India might witness another dry southwest monsoon season, according to Skymet Weather, a private weather forecasting company based in Noida, Uttar Pradesh.

“In terms of geographical risk, Skymet expects that the plains of north India, along with a few parts of the north-east region, are likely to be at risk of being rain deficient through the season,” stated a report from the company on its website.

Skymet has forecast a ‘healthy normal’ countrywide rainfall during the monsoon season. The company predicts that the overall rainfall over India in the monsoon season might be 103 per cent of the long period average (LPA), which is considered the normal rainfall.

The northeastern region receives 90 per cent of its rainfall during the monsoon months of June to September.

If Skymet’s prediction comes through, this would be the 20th year in the last 21 years when the region has received below-normal monsoon rainfall, according to data from India Meteorological Department (IMD). Last year, the deficit was 16 per cent.

In 2007, the region had received excess rainfall.

This skewed distribution of rainfall among the states meant that at the end of the season, a third of the region’s 86 districts were left with either deficient or large deficient rainfall. Of the 29 extremely dry districts, 20 were in Nagaland, Manipur and Mizoram.

Many of the states with deficit rainfall during the monsoon season, recovered in the post-monsoon and winter months. Nagaland, for instance, received an excess rainfall of 30 per cent from October 1 to December 6; Tripura, which had a 10 per cent deficit during monsoon, had 21 per cent excess precipitation since October; Manipur and Mizoram also received rainfall which was much closer to the average.

On the other hand, some states like Meghalaya and Sikkim, which had received excess rainfall during the monsoon, went into deficit in the post monsoon period.

Assam was the only state to have fared well throughout.

The region, once again, recorded a whopping 78 per cent rainfall deficit in the winter months of January and February. The situation has not improved since. Between March 1 and March 31, the region had a deficit in rainfall of 47 percent.

India’s north-east region could suffer a drought or drought-like conditions if the rest of the pre-monsoon period and upcoming the monsoon period remain rainless.

The forecast is ominous for a region that mostly depends on agriculture and allied activities and hosts some of the most bio-diverse forests and wetlands on the planet. (Source: downtoearth)